Get ready for the most spectacular celestial show starting this weekend-The Perseid Meteor Shower! This year, the meteor shower’s peak will be visible both the nights of Aug. 11-12 and Aug. 12-13. With a blanketing night sky as a backdrop, you can witness the streaks of luminous meteors skipping across the infinite veil. If you acclimate your eyes long enough (at least 20 mins) you may be able to see around 50 or MORE per hour depending on your location/light pollution. The key is- find a low light pollution spot, get comfy & be dedicated!

What is “The Perseid Meteor Shower”?

The Perseid Meteor shower is produced by comet Swift-Tuttle, which was discovered in 1862. As it orbits the Sun, this big “dirty snowball” sheds tiny grains of rock and dust. Over time, the particles spread out along the comet’s orbital path. Earth flies through this path every August, sweeping up some of the dust grains. They plunge into our atmosphere at more than 100,000 miles per hour, vaporizing as the streaks of light known as meteors.

The Perseid’s are famous for producing a large number of these bright meteors. The shower peaks this year on the night of August 12 and the morning of August 13. The thin crescent moon will be no match for the bright Perseids this year so be prepared for a great show. Best viewing will be from a dark location after about 2 a.m. local time, (when the constellation Perseus is high in the sky). Meteors will radiate from the constellation Perseus, but can appear anywhere in the sky.

With all the light pollution we are surrounded by in this day and age, it’s a shame that fewer and fewer people have actually been able to see the wonders of a pitch black night-sky. Take this time to witness one of nature’s most remarkable night shows- the Perseid meteor shower! You can visit your local park, or any area that is not tainted by artificial lighting. Grab a pair of binoculars, or just look up into the sky, and enjoy the show! 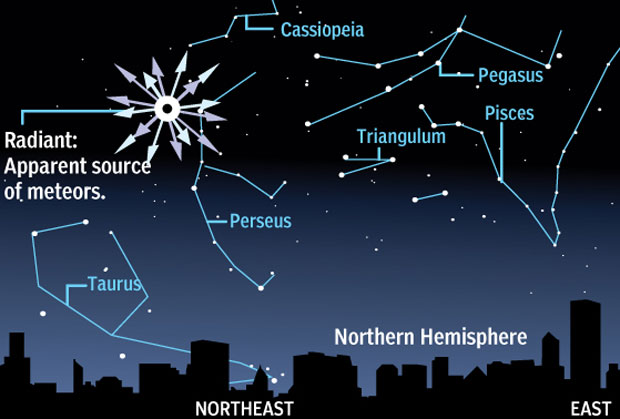 This visualization below (see link) shows these meteoroid streams orbiting the Sun, some stretching to the outer regions of the solar system. Select the meteor shower in the menu to see the corresponding meteoroid stream in space. Their meteoroid orbits are based on those measured by NASA’s CAMS video camera surveillance network, and were calculated by meteor astronomer Peter Jenniskens of the SETI Institute and NASA Ames Research Center.

View all posts by Julie Catona