I want to talk to you about tonight’s Penumbral Eclipse, but first things first.

If you’re asking WTF is Penumbral!? Then let’s walk through it…

Looking up at the sky during the daytime, as the sun shines down on our glorious earth you’ll find that any object that casts a shadow has a fuzzy perimeter. This is called the “Penumbra”. Since the Earth itself is a Sunlit object in space, tonight the sun will cast a shadow of the earth onto the moon. AKA- a Penumbral Lunar Eclipse. (got it?)

It won’t be as striking as the ones we’ve seen before, nor will the moon become red as when it passes through the Earths “Umbra” during a partial or total lunar eclipse.

So what does all this Umbra-Penumbral jargon mean? Will you see the moon completely enveloped by the Earth’s shadow? No. Will it still look dope AF? YES! Kinda…

This penumbral lunar eclipse is really a temptress- with only a taste of the penumbral shading bringing the moon into more of a fuzzy shadow, that will be visible by the naked eye.

Moving on to the When & Where

All my Eastern, North, Central & South America peeps will have a delightful view of this whisper of an Eclipse. If you’re in the North East, you’re in for a treat as you’ll be able to witness the entire eclipse from start to finish.

Here are some times below depending on your location.

So what am I looking for again?

Since the outer edge of the Earth’s penumbra is super faint, you won’t see any juicy action until the Moon’s edge has eased halfway in..it’ll take around 90 mins before you get into the mid-eclipse (0:44 UT on Feb. 11th)

During the lunar eclipse on February 10–11, 2017, the Moon skirts just outside Earth’s dark umbra. You can look for deep penumbral shading on the north half of the lunar disk.

What really makes this Penumbral Eclipse a beaut is that it falls on Feb.’s “snow moon” with comet 45p coming to join the party! YEY! Comet 45p orbits within Jupiter’s family of comets, which means that gravitation pull from Jupiter effects 45p’s orbit. A urethral green glow that trails this comet comes from the diatomic carbon that’s in its nucleus (real nerdy facts). But don’t pop the champagne just for 45p, if you don’t have a pair of binoculars or a telescope and the want to stay up until 3am EST then, unfortunately, you won’t be able to witness this celestial event. Comet 45P won’t come this close to Earth again until 2022. 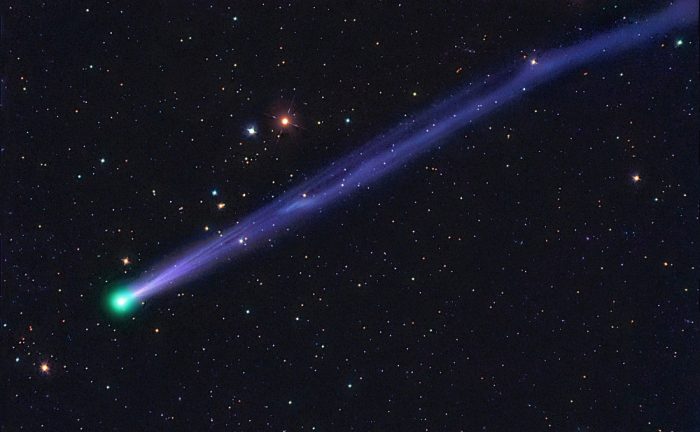