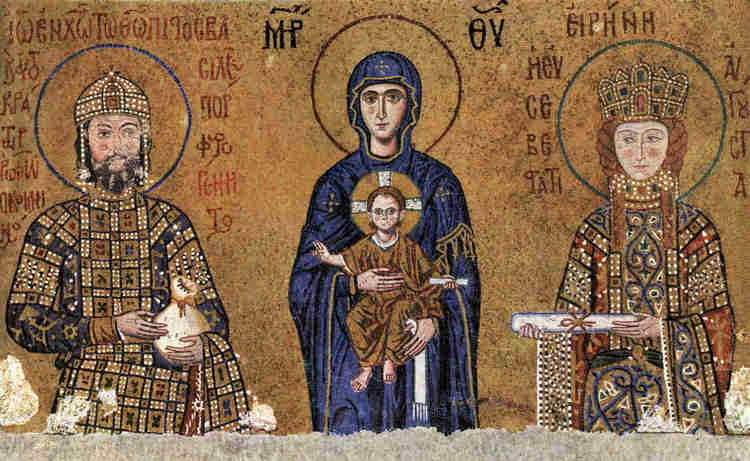 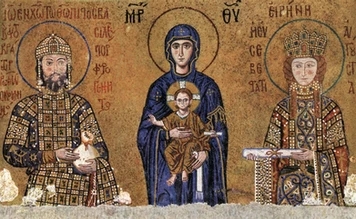 In the realm of the Byzantine Art world, Iconoclasm referred to the debate that involved both the church and state of the Eastern Roman Empire. Lasting about a century from 726-87 and then from 815-73 , legislation was brought on that forbade the production of “iconic images”. The word “iconoclasm” can be translated rather literally – as “image breaking”- and has roots dating back far before Christianity. Even in ancient Egypt for example- some pharaohs would destroy the carved visages of their predecessors- symbolizing their claim to rule. We can even see Iconoclasm in fast forwarding to the French Revolution where the images of kings were completed defaced.

These “icons” could be made from all different types of mediums, and were not just the wooden panel paintings and mosaics that we see in Byzantium relics. Icons could be worn around the neck as pendants, to be taken with upon traveling, and others such as Triptychs or Diptychs (like the Saint Michael the Archangel) that had panels on each side that could be opened and closed, thereby “activating” the icon. These icons were made for spiritual revelations, stylized in form- rather than naturalistic representation. Meant to depict a transcendental moment in time, worshipers could experience the very presence of God, as mosaic tiles sparkled in a heavenly glow as if descending from the heavens. Anyone who was in support of these icons, were branded as “Iconophiles”.

There are a few main reasons why the Iconoclastic Controversy began over these religious icons. The literal translation of the Ten Commandments in the Old Testament, prohibited against the worshiping of images, and idolatry. (Ex. 20:4)

The Iconophiles positioned the images within the same level as the holy- extending the power to an object, or portrait- allowing the images to perform as if holy (touching the cloth of a saint or praying to the image Christ, was condemned as idolatry.

Holy images not made by human hands “acheiropoieta” were said to hold power- and were used in defending cities from assault.

Influences from the Middle East- encouraged Leo III, who was of Syrian origin to begin the Iconoclasm

During the 8th century and mid-9th century, the Iconoclastic Controversy began to come into full effect. It was more than the question of where or not the icons should be revered: there was political reasoning behind the iconoclasm. It was officially inaugurated by Emperor Leo III in 726, in ordering the image of Christ to be taken down from the very gates at the imperial palace. This ban halted the production of religious figurative art, and seized or plastered over many of the icons from Byzantine Churches. Icons were also burnt publicly, and frescos and mosaics destroyed. Leaving archaeologists with very few surviving icons- like the miniature icons on Byzantine coins, and the Monastery of Saint Catherine on Mt. Sinai. Some scholars believed that the Emperor Leo III was seeking to bind the Jewish and Muslim populations, who prohibited the visual representation of Christian icons. After a brief re-establishing of the Nicaea Council in 787 that lifted the ban, Emperor Leo V began another “anti-painting” campaign that lasted until 843.

In addition to the barred production of figural images, the image of the cross was promoted, and the crisis brought in a new wave of art- a renaissance returning to its realism similar to that of the Hellenistic age. Reconstruction and refurbishing of the defaced churches employed the Byzantine painters, metalworkers, and artists, most of whom had moved westward, and who would beome major catalysts in influencing Western European art.